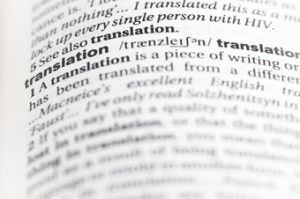 There can still be a language barrier even among fellow native English speakers. Any Englishman in New York, American in London, or Australian in Toronto can attest to that. With any type of distance — geographical, socio-economical, educational, professional — there always comes a certain cultural divide, and culture has a way of imposing its own unique spin on language, creating various regional accents, dialects, and sub-culture jargons. This is why the English heard on BBC news sounds different from that in East End, and why Bostonians sound different from New Yorkers and Texans. This is also why gangsta rappers, computer geeks, physicians, and football fans seem to speak totally different languages altogether, that a regular chap might need translation services.

Aside from the spelling peculiarities, there are subtle differences in the vocabulary too. Sometimes it would not affect comprehension at all. Mathematics is shortened as “math” by Americans but “maths” by the British. A restaurant server in either country would understand when a customer asks for the “bill” as well as for the “check”. But sometimes the differences could lead to inconvenient misunderstandings. An American guy who orders some chips in an English pub would end up getting what he would call “fries”, while a British guy who orders a muffin in an American café would be brought something that looks like a heavier, denser version of a cupcake, instead of a small round bread that’s been split in half and toasted. A “vest” would be something worn on top of a shirt in America, but in the UK would be found strictly in the men’s underwear section. If one is sued, one would need a lawyer in the US and a barrister in the UK. These differences demonstrate that translation services should be able to translate text specifically to either US or UK English.

Here are other lexical differences worth noting: