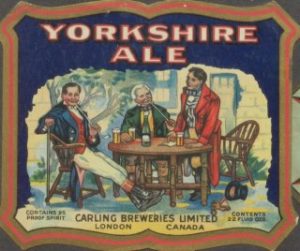 We’ve had some articles for the kids, now here’s one that’s strictly for the grown-ups!

There are some great links between booze and London and while I wouldn’t want you to go away with the idea that we are all big drinkers here, we are nevertheless really proud of our heritage.

Think Dublin and you think Guinness. Think London Ontario and you immediately think of Carling and Labatt.

Thomas Carling, a farmer from Yorkshire, and his family settled in   London, Ontario in 1818. He brewed ale for his own consumption which soon became so popular that he soon took up brewing full-time.

The first Carling brewery had two kettles, a horse to turn the grinding mill, and six men to work on the mash tubs. In London in those days, that was quite a big operation! Thomas Carling sold his beer on the streets of London, Ontario from a wheelbarrow. The business grew fast and Thomas’s sons were able to build a six-story brewery in the town and were soon distributing the beer far and wide, including supplying the army. Since the death of John Carling in 1911 the business has changed hands several times, but it still has the family name.

Labatt came along a little later, in 1847. The company was founded by John Kinder Labatt and stayed in family hands much longer than Carling, not being sold until 1995. The Carling family avoided the problems caused by prohibition in Ontario by selling before the Act was instituted. Labatt managed to weather the storm by producing two beers which were called ‘temperance ales’ – in other words, alcohol-free (in fact less than 2% alcohol) beers.

Prohibition caused many breweries to go into bankruptcy, so it is lucky for London that both of theirs survived.

The Labatt Brewery has a visitor center where you can see how the beer is made – and have a taste as long as you are old enough. Don’t forget that the legal age for drinking in Ontario is nineteen – if you are lucky enough to look young, you might want to have some photo id with you.

Speaking personally, I haven’t had to show my id for a long time – but perhaps that’s just what having kids does to a man!