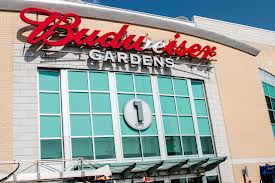 It is no secret that I love the sport. I don’t even mind what sport it is, actually – I don’t always understand the rules of some of them (like darts and to a lesser extent Rugby) but if it’s on, I’ll watch it! For a sports nut like me, London is a great place to live and as Raymond gets older and comes to more and more games with me, life just keeps on getting better! Wendy and Sarah like hockey and if you go to a game when you’re here, just follow the loudest screaming and you will find my wife and daughter.

The Budweiser Gardens is the home of the London Knights, who play in the Ontario Hockey League. They have been Memorial Cup and OHL Champions and you are guaranteed a good evening’s entertainment with them on the ice (and I am not including the Cross girls’ screaming when I say that – that’s just an extra).

Baseball fans (everyone, surely!) should head for Labatt Park. Soccer fans need the Cove Road Stadium. Incidentally, the club is the oldest soccer franchise in North America – only forty years old, but that’s a long time as far as our soccer history goes! We’ve got a great basketball team in the London Lightnings, so even if you are not a basketball fan, you really should try to catch a game while you’re here.

So, you see what I mean – for a sports fan, London is a great place to be