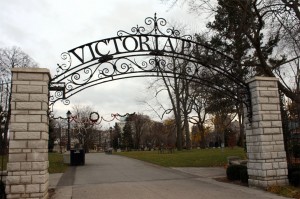 Whatever weather you like to go out in, we can promise you some if you visit London Ontario. With 2 meter snowfalls on record (December 2010 was our last real biggie) and temperatures of 100°F recorded in summer, you can see that here you pays your money and takes your choice – winter for the snow and skiing, summer for temperatures you won’t find in many places. We get well over eight hours a day of sunshine on average in the summer and in winter we have snowfall on at least half the days of December through to February.

Because we have such a varied climate (officially it is known as humid continental, mainly caused by the proximity of Lake Huron and the general elevation of London) our wildlife is spectacularly varied.

A great place to go out and get close to nature is Springbank Park which although it’s in the city covers an area of over 300 acres and has loads of walks and paths so you can wander all day long, bird watching and what have you.

Victoria Park is a lot smaller and a bit more tidied up than Springbank, but if you like your wildlife to be both tame and unusual, you should try and get out there. The population of squirrels there have an unusually high proportion of melanistic ones, in other words, they are black or at least a very dark grey. They are hard to spot at first but once you have your eye in you will see them all over. They make great photos to take home.

Sometimes at weekends in the long school holidays, we take a break up at Lake Whittaker. This is a really wild area but there are campsites to enjoy and you can learn a lot as it is a conservation area, so dedicated to educating people on the wildlife and ecology around the lake.

The kids love it and so do we because although it is really busy in the summer months it is so big that you can still walk for miles and hardly see a soul.

One thing to remember when watching for wildlife around London Ontario – bring a camera! We’re officially in the Mixedwood Plains, so watch out for white-tailed deer and the spiny soft-shell turtle. And if you don’t like spiders and bugs, watch out – Ontario is home to over 20,000 different species